This township supported cemetery, located one-half mile south of Arnold along Highway 40, was started in 1884, when Charles W. Hughey donated a plot of his ground for that purpose, after the death of miller John Koch’s little daughter, Dora.

Hughey had come to the country as a cook and general handyman for the cattlemen partners, George Arnold and Sam Ritchie. After they left in 1881, he acquired their 320 acre ranch headquarters. Hughey was killed in 1893, and his grave marker can be seen along the cemetery’s west fence, on the original plot given to him.

Although the first grave was that of Dora Koch, there are other stones with earlier death dates, put up in memory of family members who died elsewhere.

The little cemetery was first fenced in 1892, under the direction of an association with officers W. H. Thompson, A. H. Needham and A. D. Brown. A ladies association was soon formed to tend graves and plant trees and flowers.  Members in 1906 were Mrs. C.T. Holliday, Mrs. James Judkins, Mrs. Cy Parsons, Mrs. William Mills, Mrs, Samuel Reed, Mrs. Ben Hardin and Martha Morrow.

Ten more acres were added in 1912, and since then additional ground has been obtained as needed. 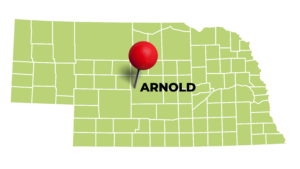